›
Home Global News WHO Surprised Many By Not Declaring Ebola a Public Health Emergency - Why? WHO Surprised Many By Not Declaring Ebola a Public Health Emergency - Why?

WHO Surprised Many By Not Declaring Ebola a Public Health Emergency - Why?

FILE – In this Tuesday April, 16, 2019 file photo, an Ebola health worker is seen at a treatment center in Beni, Eastern Congo. The World Health Organization is warning it may not be possible to contain Ebola to the two affected provinces in eastern Congo if violent attacks on health teams continue. In an update Friday, May 10, 2019 WHO warned that Ebola response activities had been halted for five consecutive days because of the insecurity (Associated Press Photo/Al-hadji Kudra Maliro, file)

The World Health Organization did not declare the ongoing Ebola outbreak in the Democratic Republic of the Congo, which has now spread to Uganda, a public health emergency of international concern (PHEIC) at their meeting June 14—the third time they met to consider this. This decision caught many off-guard.

Many experts had urged that declaration back in February, noting that the outbreak in the DRC already met the definition of PHEIC then⁠: “an extraordinary event which is determined to constitute a public health risk to other States through the international spread of disease and to potentially require a coordinated international response.”

Clearly the spread of Ebola outside the DRC has been a major concern, and it now threatens other regional countries. There has been a muted international response, with less of an outpouring of support than in the 2014 outbreak. What’s different?

The DRC Ebola outbreak is more complicated than the initial outbreak in West Africa, as it is occurring in a war zone. Besides the ongoing violence there is more mistrust of health care workers in the community, according to Lawrence Gostin, director of the WHO Collaborating Center on Global Health Law at Georgetown University. He added, “Standard strategies like case identification, vaccination, and treatment cannot succeed in a complex humanitarian crisis like the situation in the DRC.” That the current outbreak continues to expand, despite the availability of an effective vaccine, is an ominous sign.

The WHO has only declared PHEIC four times previously:

The WHO did not declare the PHEIC in February, in part due to concerns that travel or trade barriers would be devastating to the DRC.

The WHO is in a difficult position on several fronts. Just last week, there was a letter sent to director general Dr. Tedros Adhanom Ghebreyesus regarding a crisis of confidence over their handling of Rifampicin-Resistant and Multidrug-Resistant Tuberculosis (RR-/MDR-TB) guidance. Signatories included Partners In Health, Médecins sans Frontières (Doctors Without Borders), and Treatment Action Group. TB expert Jennifer Furin, lecturer, Harvard Medical School, explained that fortunately, WHO’s director general responded this time with a strong commitment to strengthening the processes of guideline development, and by holding a meeting with the concerned parties. Dr. Tedros placed responsibility to follow-up on this on Dr. Soumya Swaminathan, WHO’s Chief Scientist. Unlike previous responses, WHO defined clear action items this time. Parties to the letter are encouraged by Dr. Swaminathan’s commitment and view her response to TB as a litmus test of how reforms will work.

With Ebola, WHO’s response may protect trade in the region temporarily—seemingly their driving concern—but sacrifices some of the benefits of declaring a PHEIC—especially in regards to public perception and to funding, which currently has a $54 million gap.

Preben Aavitsland, acting chair of the WHO’s expert committee, tried to explain the committee’s decision not to declare a PHEIC. He said that while the DRC’s outbreak was an emergency for the country, it did not meet criteria to declare it a PHEIC—a high risk threat requiring immediate attention from other world leaders. Surprising many, despite the spread to Uganda, they did not feel the outbreak posed a significant risk to other countries. In their assessment, there was too great a risk of harm to the DRC in proportion to the value of increased attention a PHEIC would bring. “The response continues to be hampered by a lack of adequate funding and strained human resources,” Aavitsland added. Still, “to declare [a PHEIC] in an effort to try and raise funds would be a misuse of the instrument.” 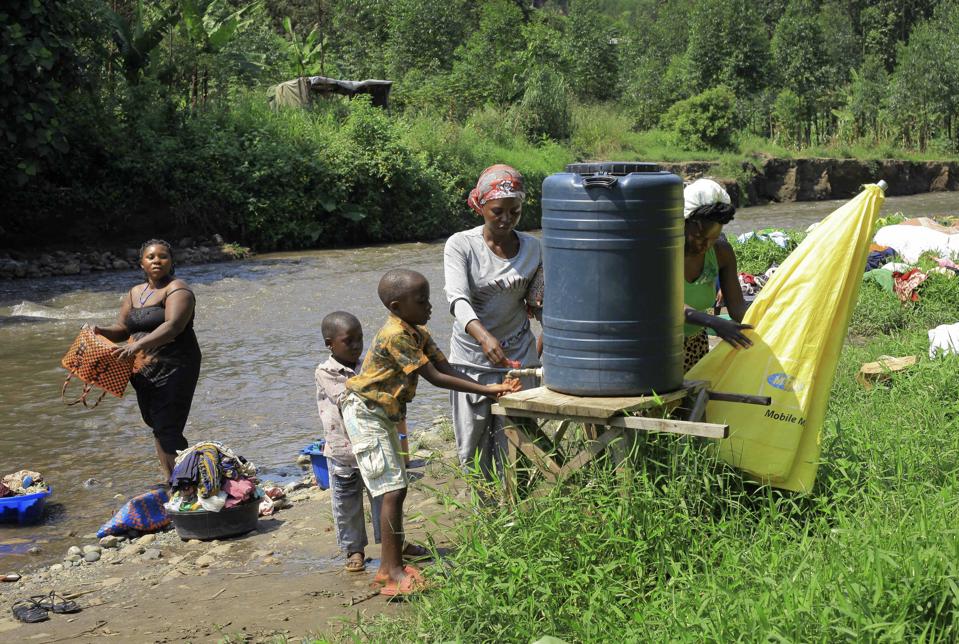 Local residents wash clothes in the shallow Lubiriha River, an area that is popular with those who want to cross into Uganda without passing through the official border crossing, in Kasindi, eastern Congo Wednesday, June 12, 2019, just across the border from the Ugandan town of Bwera. In Uganda, a 5-year-old boy vomiting blood became the first cross-border victim of Ebola in the current outbreak on Wednesday, while two more people in Uganda tested positive for the highly contagious disease that has killed nearly 1,400 in Congo. (AP Photo/Al-hadji Kudra Maliro)

a PHEIC would have raised the levels of international political support which has been lacking to date, enhanced diplomatic, public health, security and logistic efforts as well as released more financial resources…cross border spread has now happened. There is need for coordinated international response… Which element of a PHEIC is missing?

History of the US Response to Ebola

Concern has also been expressed about the differences between this administration’s response to Ebola and those of the prior administration.

Gostin notes that then President Obama got a “$1 billion emergency appropriation, led a UN Security Council resolution, and deployed the military in a non-combat role.” The US sent more than 3,000 DOD, CDC, USAID, and other U.S. health officials in the West Africa outbreak, taking the lead with the support of France and the United Kingdom in the 2014 outbreak. Not any more.

The Trump administration’s response to Ebola has been, at best, tepid. Julia Belluz and Alex Ward have an excellent summary of this at Vox⁠. Last year, there were deep cuts to the budgets of the CDC and USAID. The CDC had to close 39 of 49 overseas offices.⁠ These included all those in South America, despite Brazil having been a hot spot for Zika and Yellow Fever. The CDC’s own Division of Global Health Protection previously cautioned, “We know that a disease can be transported from an isolated rural village to any major city in as little as 36 hours.” The Infectious Diseases Society of America further described the proposed budget as “undercutting overseas work that protects Americans.”

Further, this administration barred the CDC from working in the epicenter of the outbreak,⁠ citing security risks. The CDC has some staff in other parts of Africa, serving in ancillary roles, according to CDC spokesperson Tom Skinner, providing increased “operational support⁠.”

It was notable, too, that in August, 2014, while we had humanitarian health care workers on the ground in West Africa, risking their lives to save others and to prevent Ebola’s spread, Trump tweeted:

The U.S. cannot allow EBOLA infected people back. People that go to far away places to help out are great-but must suffer the consequences!

At that time, then Secretary of Health Tom Price said, “It’s not only our responsibility,” to let them back, but “it’s a moral action that must be taken.” “The United States has an incredibly important role to play in terms of world health”… “I believe we are the leader.”

In sum, we have an Ebola outbreak which is uncontrolled, despite the availability of an effective vaccine this time (unlike in 2014-2016). As of mid-June 2019, the outbreak in the DRC has already sickened 2,108 and killed 1,411 since last August, and just spread to neighboring Uganda. Although Uganda is better prepared to handle an outbreak, having vaccinated front-line health workers and built additional training facilities, one wonders how long they can maintain that protective barrier. They have traced 98 contacts of the three cases of Ebola identified in their country, and are providing them Merck’s vaccine, as part of the effective ring vaccination strategy.

Many infectious disease experts understand that, “An outbreak anywhere is a threat everywhere⁠.” (CDC)  “The best way to stop this disease, the best way to keep Americans safe, is to stop it at its source — in West Africa.”⁠ (Obama) It doesn’t matter whether an infection is transmitted person-to-person through contact, or through the air, as TB and measles are, often before the person has any symptoms. These illnesses pose a security risk to the US that cannot be stopped by any physical barrier. They requires education, prevention, effective interventions at the source of the disease, and a recognition that this is a part of globalization. Addressing these humanitarian and security crises requires new ways of thinking and working with partners everywhere.

This article was written by Judy Stone from Forbes and was legally licensed through the NewsCred publisher network. Please direct all licensing questions to legal@newscred.com.