For good reason — the raging global pandemic of Covid-19 — public sensitivity to the detection of new pathogens is at an all-time high. Earlier this week, Canadian officials reported that a variant of the influenza virus that normally infects pigs, a virus known as Influenza A (H1N2)v,  was detected in a person in Alberta. Although novel influenza viruses are indeed something to be wary of, this event is not a cause for alarm.

As I’ve written about concerning “one health”, people and animals often swap pathogens back and forth — especially viruses. We don’t yet have the details about this specific virus (we need a genetic analysis for that), but we do understand a lot about influenza viruses in general.

To put this new discovery in context, it is helpful to know some things about the biology and ecology of influenza viruses. 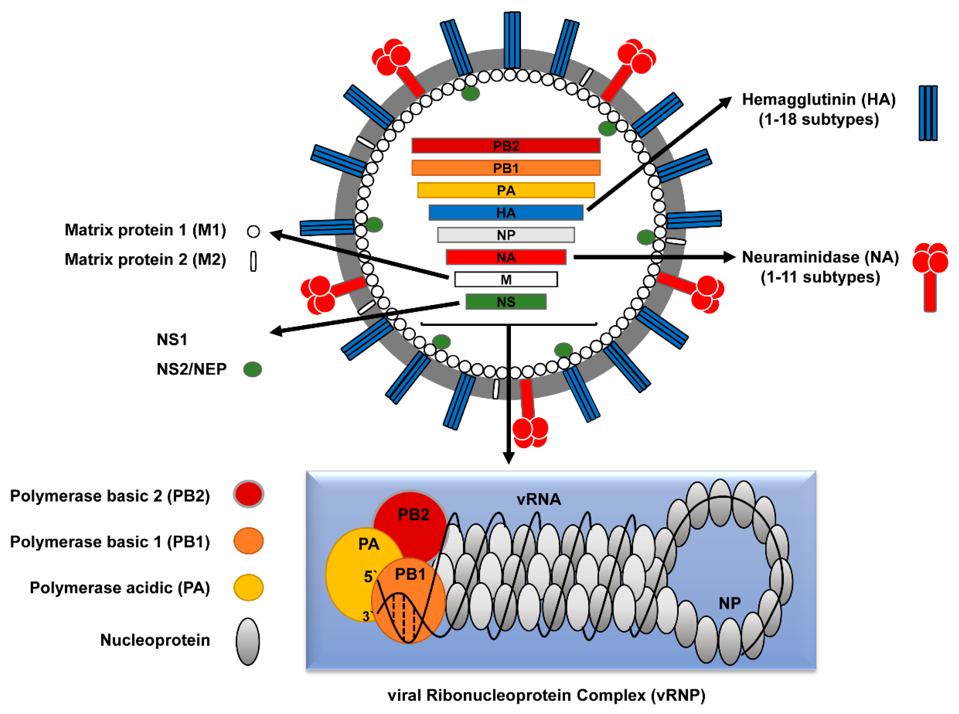 Structure of the Influenza A virus

In the diagram, two of the proteins are shown to protrude through the surface of the virus particle. These are hemagglutinin, designated HA, and neuraminidase, designated NA. From the virus’s point of view, the HA and NA genes are important because they allow the virus to get into and out of the host’s cells, which is essential for the virus to replicate and spread. From the host’s point of view, these proteins are important because they can be recognized by the immune system, which allows virus particles in the host to be targeted and destroyed.

The HA and NA genes are quite variable, and each is represented by a large number of variants known as sub-types, which of course may be found in different combinations. To date, scientists have described 18 different HA subtypes and 11 different NA subtypes within Influenza A, which are also used to name the various viruses. Thus, the virus named H3N2 (a relatively common influenza virus of humans) expresses the third HA subtype and the second NA subtype. Since the 2009 flu pandemic, the most common human influenza A virus has been H1N1, meaning that it combines the first HA subtype with the first NA subtype. Of course, many other subtype combinations are possible (although not all have been found to exist), and most are found in birds. The results of one recent study showing this diversity are shown in the following figure.

Frequency of Influenza A HA and NA subtypes among 542 wild birds in the Netherlands.

Among the Influenza A viruses, three different hemagglutinin subtypes have sometimes been found to be lethal in people. The most well known of these is H5N1. But not all H5’s are highly pathogenic. Besides N1, H5 also combines with N2, N3, N4, N5, N6, N7, N8, and N9, which are typically not highly pathogenic (although there is a pathogenic variant of H5N6). Even among H5N1 viruses, highly pathogenic variants are not common, depending on specific genetic variations found in the HA, NS, and PB1 genes.

Besides H5N1, a variant of H7N9 has also been found to be highly pathogenic. Twenty-four out of 126 people died in the first outbreak of H7N9 in China in 2013. Subsequent outbreaks have been linked to live bird markets and it appears that people almost exclusively catch H7N9 from birds, rather than from other infected people. Subsequent outbreaks occurred in 2013, 2014, 2015, and 2016.

Cases and deaths in an outbreak of Avian Influenza A(H7N9) in China, February-April 2013.

Since it is an H1, it is exceedingly unlikely that the virus detected this week in Alberta is highly pathogenic. Moreover, it is quite unlikely to spread in people, because it is a virus strain that is adapted to replicating in pigs. Indeed, more likely than not, pigs initially caught this virus strain from humans and have been circulating it among themselves ever since.

Even though the swine variant of H1N2 discovered in Canada this week is extremely unlikely to cause a pandemic, there are still two reasons to be watchful about influenza viruses from pigs that are detected in people.

First, should the virus begin to spread in people, because the genetic sequence of the hemagglutinin protein is sufficiently different from that which is found in the flu vaccine, then the vaccine may not be very protective. Since ordinary seasonal influenza kills hundreds of thousands of people worldwide, even in years when we have effective vaccines, staying ahead of emerging flu strains is an important task for global health. It’s too late to add this virus to this year’s vaccine cocktail.

Under these circumstances, it is possible for the highly pathogenic components of the influenza virus to combine with components of the human or swine-adapted virus during viral replication through a process known as reassortment. The result could be a virus that is both highly pathogenic and highly transmissible in people. Prior to Covid-19, many scientists thought that this was the most likely path to a highly lethal, global pandemic. The fact that a novel coronavirus emerged first doesn’t diminish the chance of such a pandemic now or in the future.

Fortunately, this is not what has occurred in Canada.

This article was written by John Drake from Forbes and was legally licensed through the Industry Dive publisher network. Please direct all licensing questions to legal@industrydive.com.