On March 11, 2011, an earthquake of magnitude 9.0 occurred in the Pacific Ocean off the coast of Japan’s Tōhoku region. The catastrophic tsunami triggered by this earthquake spread across the entire eastern coast of Japan and killed 18,000 people. Japan is a country with a long history of disastrous earthquakes and tsunamis, sitting just along the collision zone of four great lithospheric plates. The continuous movements of the plates accumulate a lot of energy, released from time to time as earthquakes. Written records of strong earthquakes and their aftermath date back at least 1,600 years, but Japanese tried to warn also future generations of the risk.

The coastline of Japan is dotted with stone tablets, bearing warnings like “High dwellings are the peace and harmony of our descendants,” and  “Remember the calamity of the great tsunamis. Do not build any homes below this point.” Inscriptions on 600 years old stone markers located near the coastal city of Kesennuma warn descendants “Always be prepared for unexpected tsunamis. Choose life over your possessions and valuables.” The stone tablets, referred as “tsunami stones”, commemorate earthquakes and tsunamis of the past, realizing a direct connection between the disasters, stating also that “If an earthquake comes, beware of tsunamis.” 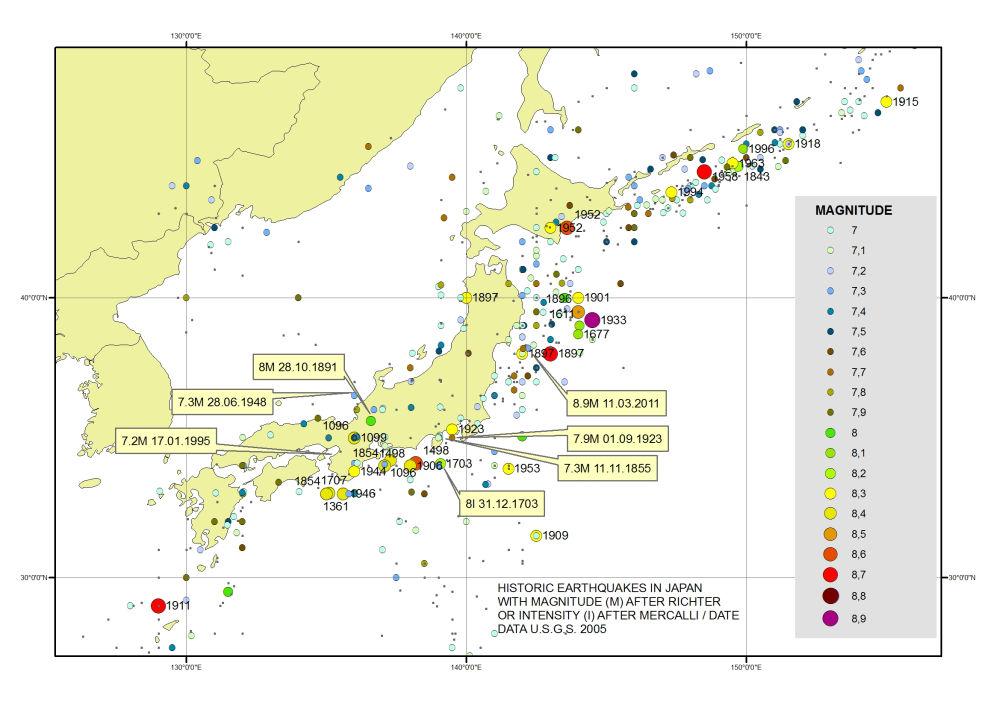 Map of Japan showing a selection of earthquakes with a magnitude greater than 7 in the last 100 years and major historic events, data by the U.S.G.S. 2005.

Most modern tsunami stones date back to around 1896 when two tsunamis killed about 22,000 people along the Japanese coastline. In Aneyoshi, a small village on Japan’s northeastern coast, the inhabitants fled the tsunami of 2011 by climbing to higher ground, following the warnings of a stone marker erected after a tsunami destroyed the village in 1933 leaving only four survivors behind.

Modern research has shown that it takes just about three generations for people to forget about a disaster. Those that experience and survive the earthquake or tsunami themselves pass the story to their children and their grandchildren, but then the memory quickly fades. Tsunami stones were a way to warn generations ahead of the potential dangers coming from living and building near the sea. Today many tsunami stones are slowly decaying, covered by vegetation or simply forgotten. After World War II, Japan quickly recovered. Cities spread along the coasts, often disregarding the warnings of the past and feeling safe behind the huge sea walls built to protect the coastal towns after 1960, when another tsunami hit. However, walls alone can’t protect a community, people need to know of the possible risk and how to react in case of a disaster. Many people died in the 2011 tsunami as they returned back to their homes immediately after the earthquake, inspecting their damaged homes.

Inspired by the ancient warning system, modern researchers have proposed to preserve some of the buildings destroyed by the 2011 tsunami. They could serve as reminders of the waves’ destructive power for the generations to come. Maybe even more so, we should value the experience and stories of people. Older residents, survivors of the 1960 tsunami, said after the disaster that they regretted not making more of an effort to teach younger people about the risks.