It's Climbing Season On Mt. Everest As Cyclone Fani Approaches

It's Climbing Season On Mt. Everest As Cyclone Fani Approaches

The Indian Ocean has been very busy this season with tropical cyclone activity. Devastating cyclones ravaged parts of Africa and now Cyclone Fani is approaching the Indian coast. Millions of people are potentially in the path of the storm, and evacuations have been ordered. Forbes contributor Eric Mack provides a good synopsis of current conditions. He writes:

A combination of population density, flood-prone landscapes and inadequate housing and infrastructure in the region set the stage for catastrophe in this part of the world when natural disasters strike. And this is just the beginning of the tropical storm season.

The immediate threat to India and Bangladesh should be the focus of the world right now, but Professor John Knox, a colleague of mine at the University of Georgia, pointed something else out in social media that caught my eye. It is mountain-climbing season in the Himalayas, including Mt. Everest. What does this mean for climbers? 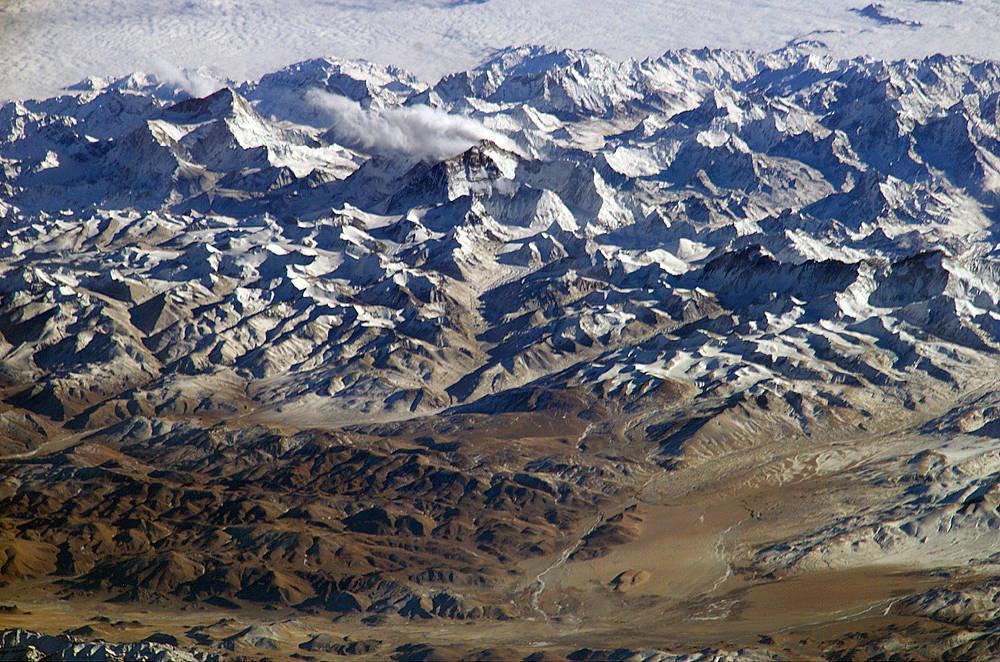 At the time of writing, Fani was in the territory of a category 4 storm. Bob Henson wrote in Weather Underground on May 2nd:

Fani’s top sustained winds had increased to 155 mph—just 2 mph shy of Category 5—as of 12Z (8 am EDT) Thursday, according to the Joint Typhoon Warning Center (JTWC). Fani could briefly intensify to Category 5 strength before an expected landfall on Friday morning local time, or IST (Thursday night EDT) within 50 miles of the city of Puri (population 200,000). 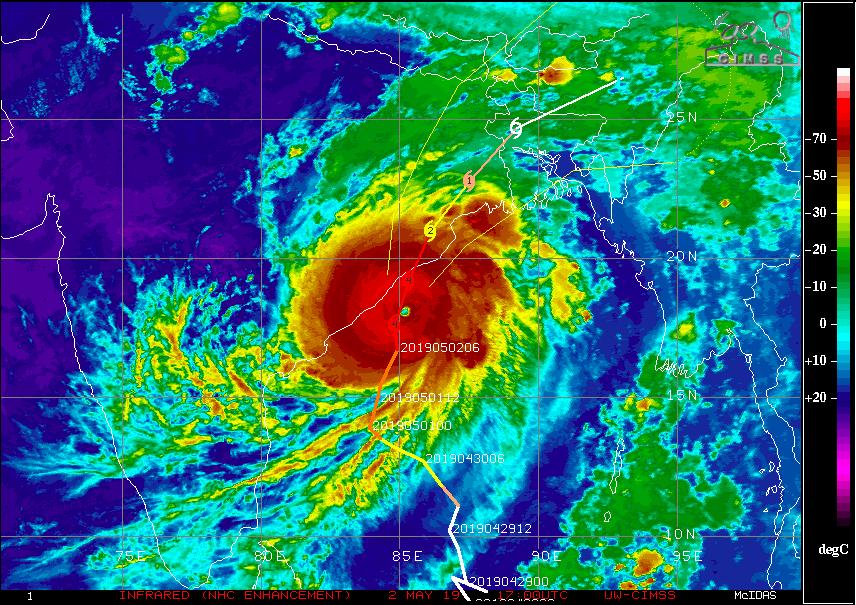 As the storm moves inland, it will certainly weaken, but the Himalayas could possibly modify the storm. To understand the possibilities, it is instructive to review Tropical Cyclone Hudhud from 2014. It came ashore as a category 3 storm near the city of Visakhapatnam.  Andrew Freedman, a writer with Mashable at the time, pointed out:

The blizzard was partly a product of the cyclone’s counter-clockwise circulation, which pushed copious amounts of moisture up against the wall of mountains in Nepal and northern India. The winds around the cyclone temporarily directed a firehose of moisture from the warm waters of the Indian Ocean north-northwestward toward the Himalayas — some of the world’s tallest mountain peaks with elevations above 20,000 feet

Projected track of Cyclone Fani as of May 2nd.

The process of mountains lifting moisture-laden air to produce precipitation-generating clouds is called orographic lift. In addition to the potential for snowfall measured in feet, the remnants of Cyclone Fani could also present other challenges for climbers as Cyclone Hudhud did, including  strong winds and avalanches. The Himalayas (below) are a natural lifting mechanism when any portion of the wind flow pattern is from the south, but the ultimate track will determine whether we see anything similar to what happened in 2014. 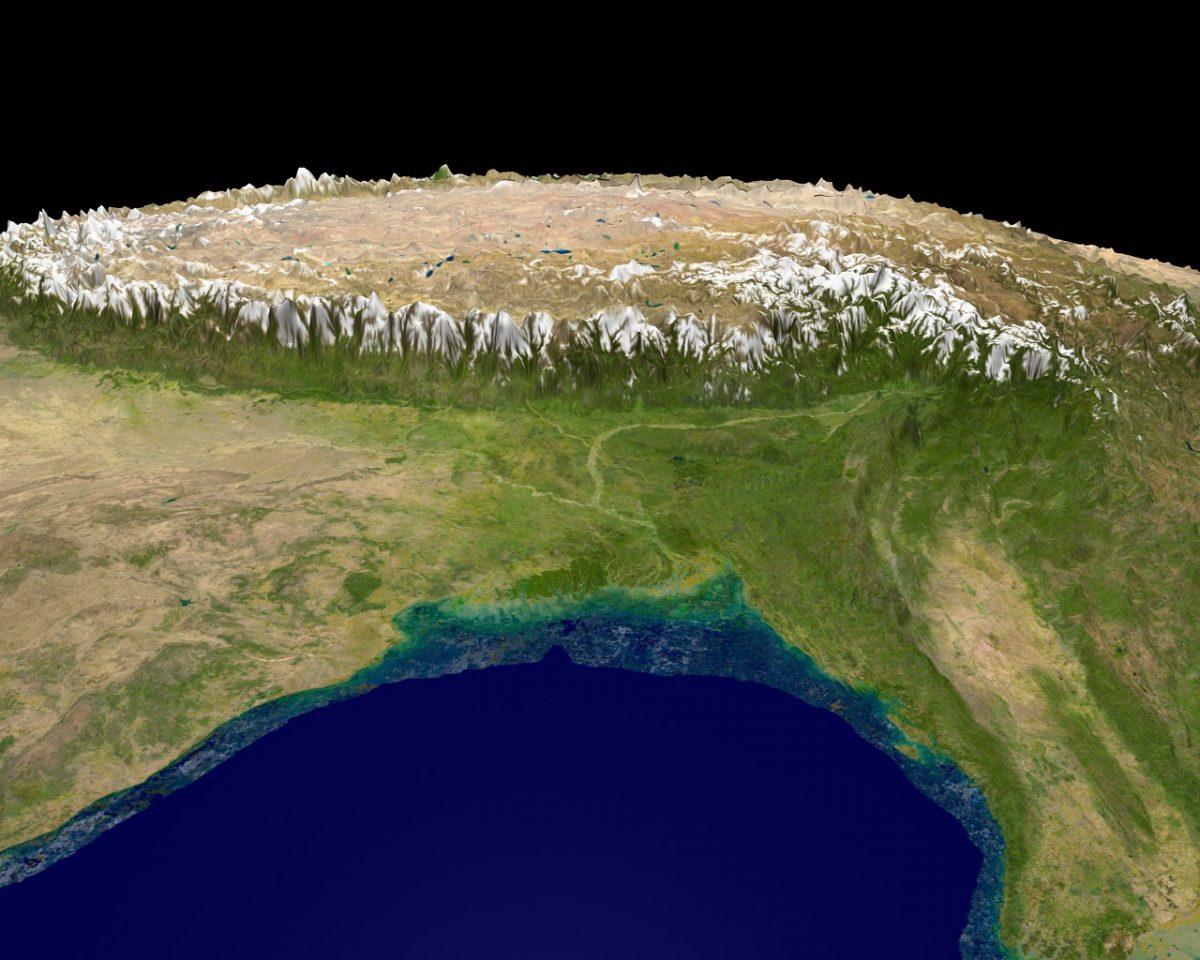 Forecasters in Nepal are paying close attention to Fani. According to Spotlightnepal.com, the Meteorological Forecasting Division was monitoring the possibility of rainfall in Nepal and snowfall in the central and eastern Himalayas.  According EverestWeather.com, winds begin to subside in May, so any dramatic increase in winds or snowfall in the already harsh environment of these dramatic peaks is a problem for climbers. Climbers started taking note of Fani earlier in the week. A climbing blog called Alanarnette.com posted the following alert on April 27th,

Tropical cyclone 01B (Fani) has formed in the Bay of Bengal…On May 3 this cyclone will be well south of Mt. Everest (746 miles-1194 km). Thus no impacts on Everest through May 3. However we need to monitor this as this moves inland and if the moisture from the cyclone tracks towards Everest and bring increase chances of snowfall after May 3.

The graphic below shows the expected location of Cyclone Fani on the evening of May 3rd. 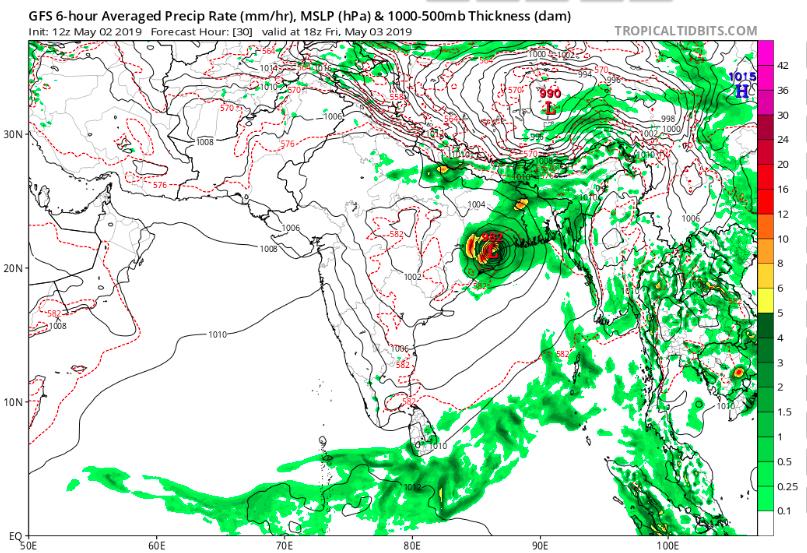 The predicted location of Fani on May 3rd.