Four Lessons From 'Bomb Cyclone' Flooding In The Great Plains

Four Lessons From 'Bomb Cyclone' Flooding In The Great Plains

The “bomb cyclone” dominated headlines last week, but the flooding it caused in the U.S. Great Plains did not initially. Many communities, homes, and businesses in Nebraska and other parts of the Great Plains were literally underwater. Levees were breached causing some rural towns to be completely isolated. Flooding was so bad that the National Weather Service had to abandon its offices in the region, and Offutt Air Force Base, home of the U.S. Strategic Command, was partially submerged. I convened a virtual panel of experts to gather perspective on the forecast, the messaging, and perceptions about this event. Four lessons emerged. 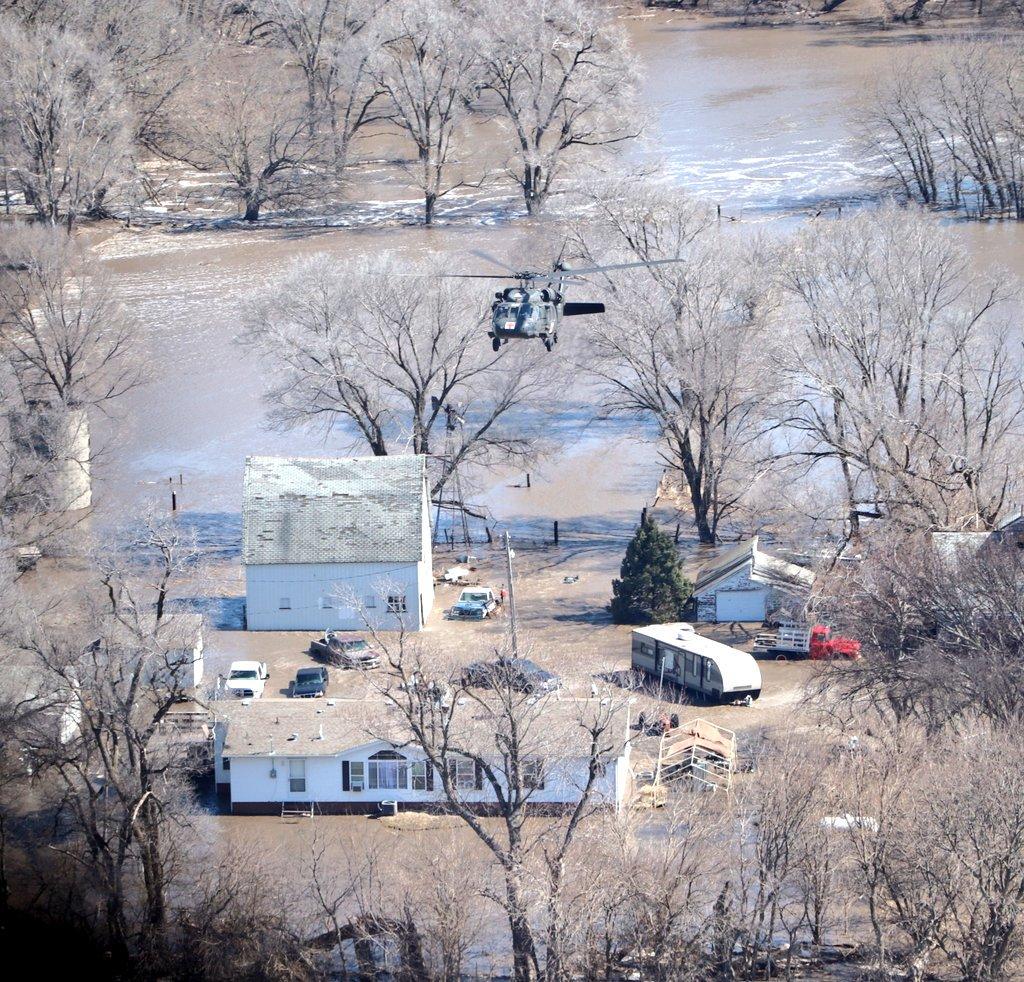 Flooding in the Great Plains

The panel consisted of: 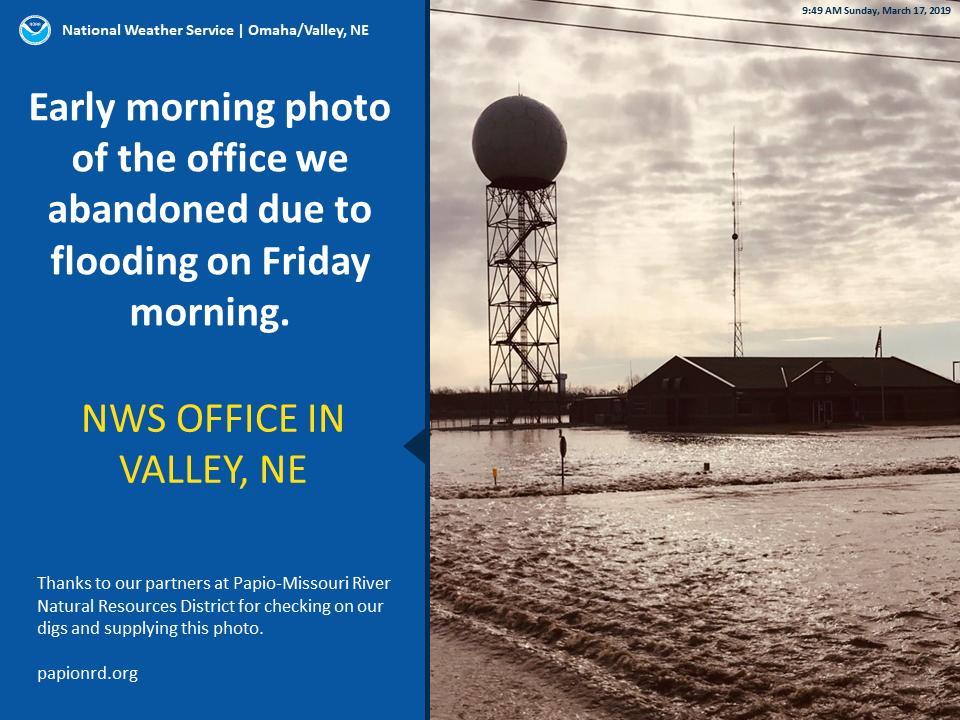 The National Weather Service had to abandon its offices in Nebraska because of flooding.

One thing that we learned is that a tragic set of events came together to cause the dramatic flooding event. Dewey provided the following hydro-meteorological analysis:

The event was a “perfect storm”, similar to a hurricane arriving on the coast at high tide. A sudden warm up, an unusually deep snow pack that “flash” melted combined with heavy rains and a frozen ground with 100% of the melt water and rain running off (i.e. no infiltration). Add to that the river ice suddenly breaking up with huge ice chunks slamming into highway bridges knocking them out and water overtopping the roads and washing them out left some communities

Snowpack was extensive and very wet, and because it arrived late in the season, it was still there *and* the ground was still frozen. The rains that fell were on the high end of the range of possibilities, but not outside of what can happen in mid-March in the area. But they fell on that very wet snowpack, causing runoff into rivers covered with very thick ice.

She also pointed out that enhanced moisture and track shifts associated with changing climate must be factored in to events like this going forward.

Another lesson is that infrastructure challenges played a role. Professor Bledsoe has spent a career thinking about such issues and how to engineer resilient systems. He told me:

These floods are the result of several cascading factors – heavy rain falling on snow and frozen ground, dams and levees breaching, ice jams clogging up and destroying structures, and yes, people building in floodplains. We have to do a better job of accounting for these cascading risks in our planning and designs if we want to avoid this domino effect in the future.

The levees were an important story in this event. Professor Ken Dewey has lived in Nebraska for several decades. He adds:

Once one levee failed, there was a cascading effect of surging water moving to the next levee downstream, overtopping that levee with additional failures….The rivers in some locations reached record levels. Remember many of these levees were built decades ago and most likely were built to standards of that time. I think it is more of weather disaster than a failure to properly maintain infrastructure.

Most of the panel agreed that a combination of weather, water, climate, and infrastructure failure led to the disaster. Mayes-Bousted paraphrased a message from the U.S. Army Corp of Engineers that ”all of the engineering around the Missouri River and its tributaries is designed to keep the majority of floods at bay, but not the most extreme of events.”

While in the headlines now, there was a lag before this event was on the media and “social media” radars. I have previously written in Forbes about “urban” biases in how weather events are covered. We learned from this event there are unique challenges in rural or non-coastal environments. Tompkins messaged:

Unfortunately, late and limited coverage seems to be a common theme for inland flooding. Coastal flooding driven by hurricanes tends to grab headlines but some might be surprised to know that over the last 10 years, six out of the eight states experiencing the most major floods have been inland. Further, how many people outside of Nebraska would know this latest flood is the 14th such disaster to strike the state since 2008 – 5th most of any state in the nation.

Mike Chesterfield works for one of the largest weather-focused networks in the world. He provided a dose of realism:

Partly due to the fact that the forecast called for rainfall totals that were not earth shattering some were slow to realize the top end potential of this event thus many in the media were not prepared for the level of flooding that did occur which meant there was not a ton of run -up to this particular event. As a result the news media really did not have this event on their radar until late in the game….It became clear to us at The Weather Channel that this event had the potential to be a historic one. We started to plan crew deployment before the first rain drop even fell. With that said we can’t do it alone.

He also pointed out that because this particular disaster did not strike a heavily populated area, there was likely less attention being paid to it. He went on to say:

Chesterfield added that “this does not excuse the media, instead it should be seen as a challenge to the media to be better by finding ways to relate such stories to the masses.”

Ken Dewey also pointed out another aspect of the “rural problem” that shouldn’t be missed. He mentioned how the distance between towns makes it difficult to get assistance across such a large area. He reminded me:

This was not a narrow zone like hurricane impacts along a coastline but an area covering three states. Many of these small communities have a declining population base and do not have the economic resources to quickly recover (even with Federal assistance). Many of the people that suffered flood damage will not have insurance coverage since homeowners insurance does not cover flood loss.

Mayes-Bousted expands on the scope of the human toll and vulnerability factors at play because farmers were not planting yet. She pointed out:

The soaked ground may not be plantable until late season, at best, if at all this year. Lands may be silted and unusable for more than just this year. I’m afraid to know what the toll is of livestock losses. People sometimes dismiss the overland flooding as “just farmland flooding,” but to those who live on and work that land, it’s devastating financially (not to mention physically and emotionally).

What was learned going forward? With most weather-related disasters, we tend to be reactive rather than pro-active. I suspect this tendency will not change with this event. Steve Bowen says,

The flood peril continues to deal with a perception problem. Damage from flooding is often much different than what you see from wind-driven impacts resulting from a tornado or hurricane-related winds. Because a home or business is not structurally scattered, there is a common perception that no damage has occurred. The reality is that even a few inches of water intrusion can lead to a significant cost to inside contents.

Professor Krajewski argued that there are ways forward. After the tragic floods of 2008, Iowa’s state legislature established the Iowa Flood Center at the University of Iowa, of which Krajewski serves as Director. He sent the following email:

The center has deployed 250 “bridge sensors” that report in real time, developed state-wide flood inundation maps, a real-time forecasting system that complements that operated by the NWS and the Iowa Flood Information System, an on-line platform that communicates all the data to general public in real time. All these advances cannot stop floods, of course, but they do provide relevant information. The IFC works side by side with the federal and state agencies responsible for public safety and well-being. Perhaps we need more systems like these that can engage the academic experts and provide additional service to the communities. 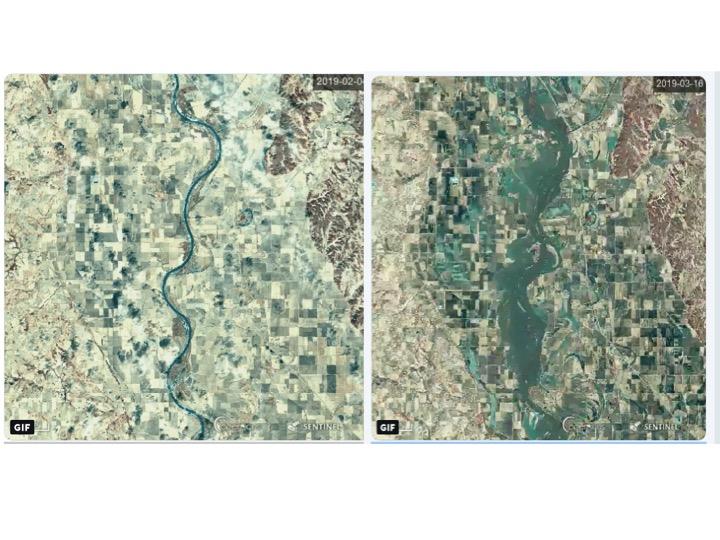 Before and after flooding from the Sentinel-2 satellite.