The Annual Worldwide Shark Attack Summary Is Out

The Annual Worldwide Shark Attack Summary Is Out

Carcharodon carcharias – the great white shark – has long been demonised as man’s great ocean nemesis. An apex predator, all pointy teeth and deadened eyes, it’s a favorite literary and filmic villain equally adept at scaring the life out of children and adults alike.

This week saw two well documented shark attacks around the world. One on a 25-year-old paddleboarder in Hawaii who suffered significant injuries and is still critical in hospital.  The other on a 19-year-old surfer at the famed surf break Cape St Francis in South Africa. Bitten on the knee while surfing near the shoreline, he was obviously unlucky to be bitten but equally lucky his injuries were only minor and he’ll live to tell a great story. But realistically, how likely are you to be the victim of a shark attack?

The International Shark Attack File (ISAF) – a global database of shark attacks – investigated 155 ‘incidents of alleged shark-human interaction occurring worldwide in 2017’ and has presented its results.

From the 155 documented global attacks, 88 were unprovoked and 30 provoked. Of the rest, 18 were attacks on boats, two involved extraordinary-sounding ‘shark-inflicted post mortem bites’, known as scavenge, one was a diver in a public aquarium and the others either couldn’t be confirmed or were doubted to be straightforward attacks or even by sharks. 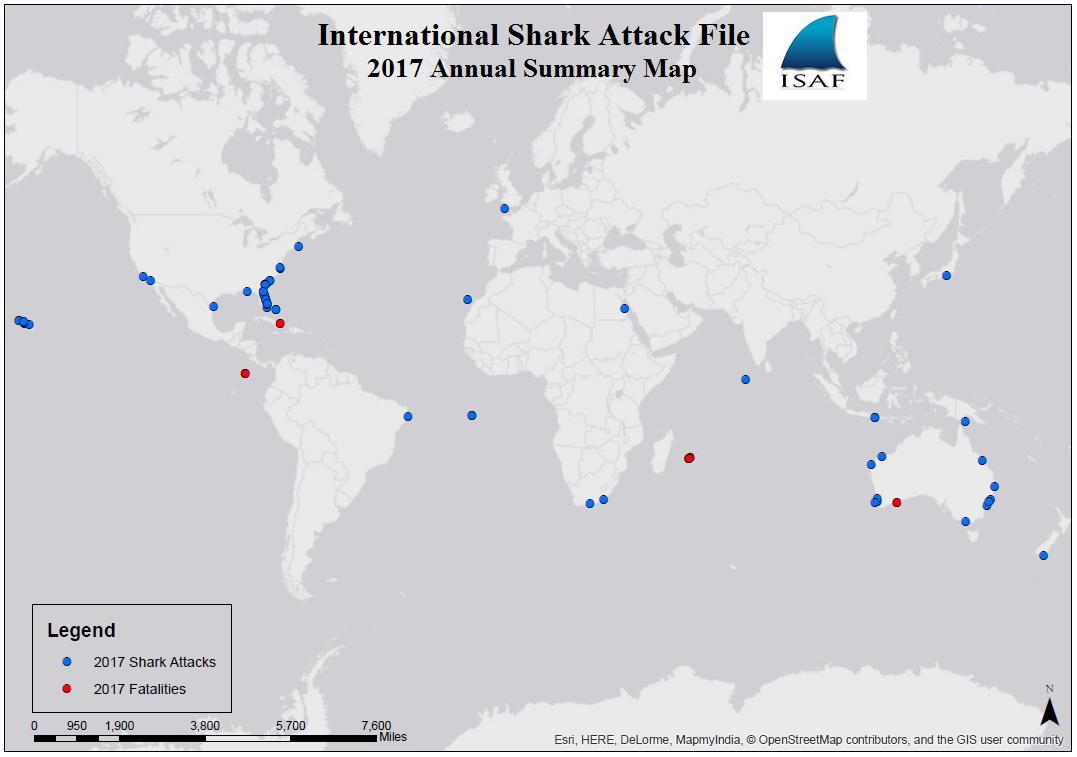 ISAF defines a provoked attack as one where a human initiates physical contact with a shark, such as a diver getting bitten when trying to grab one or bites that happen while removing sharks from fishing hooks and nets. Unprovoked is where a shark attacks a live human in the shark’s natural habitat with no human provocation.

Two thousand and seventeen actually saw a rise in unprovoked attacks with 88, higher than the most recent five year average, taken between 2012 to 2016, of 83 attacks. ISAF is at pains to point out that this was expected and is still significantly lower than 2015’s high of 98. It was expected because the world population is growing and interest in watersports is increasing, leading to more people in the seas – and more people means more likelihood of having a toothy encounter. What’s particularly significant though is that of all the unprovoked attacks, only five were fatal.

Topping the list of shark attack countries is the United States, which is consistent with long term trends. Accounting for over 60% of global attacks, the US saw 53 incidents in 2017, down on 56 from 2016. Again significant, none of these attacks was fatal. Florida has been the shark hotspot for decades, and 2017 was no exception with 31 attacks, more than half the nationwide total and more than a third of all attacks globally.

Second spot worldwide goes to Australia with 14 attacks, one of which was fatal. Third with three attacks (two fatal) is Reunion Island in the Indian Ocean, an infamously sharky area where surfing has actually been banned because of the danger. Other countries to have seen two attacks include South Africa, Ascension Island, Indonesia, Costa Rica (one fatal) and the Bahamas. And Brazil, the Canary Islands, Cuba (fatal), Egypt, Japan, the Maldives, New Zealand and, amazingly, England each saw one incident. 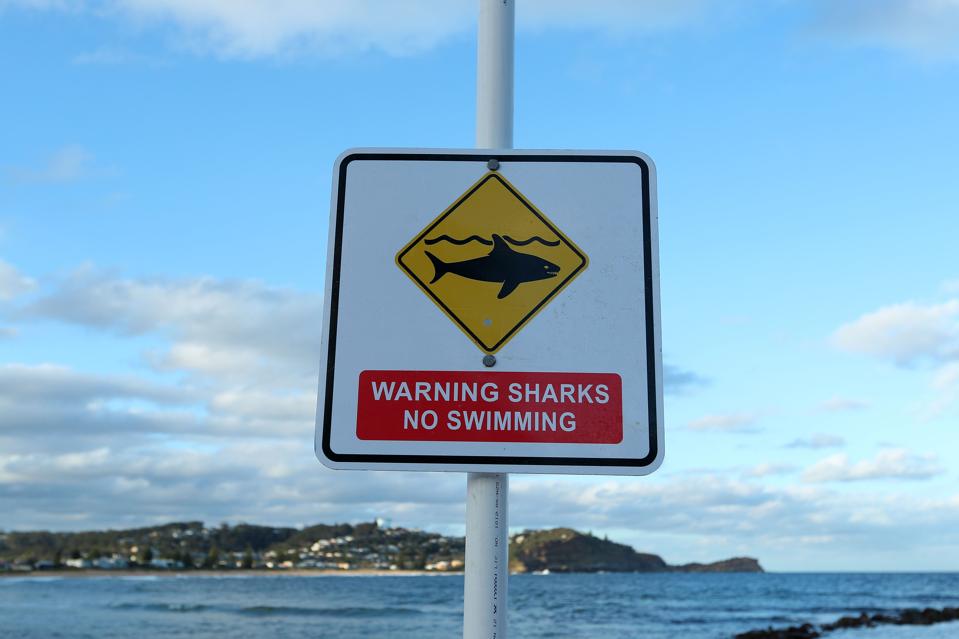 Warning signs tell people not to swim after a surfer was attacked at Avoca Beach in Australia in November, 2017. (Photo by Tony Feder/Getty Images)

Unsurprisingly, surfers and other board sports enthusiasts endure the most attacks thanks to lots of factors, from the sheer number of us to where we surf and what we do – splashing and paddling on the surface is a good way to get a shark’s attention.

Perhaps the biggest truth this data reveals is just how rare shark attacks are, especially fatal ones. Billions of people enter the oceans each year for all manner of reasons, yet there were only five deaths directly attributed to shark attacks. That makes it a lot more likely that you’ll be struck by lightning or injured doing some home improvements – the Florida Museum has some interesting comparisons of shark attacks against other risks which do a great job of proving the point. 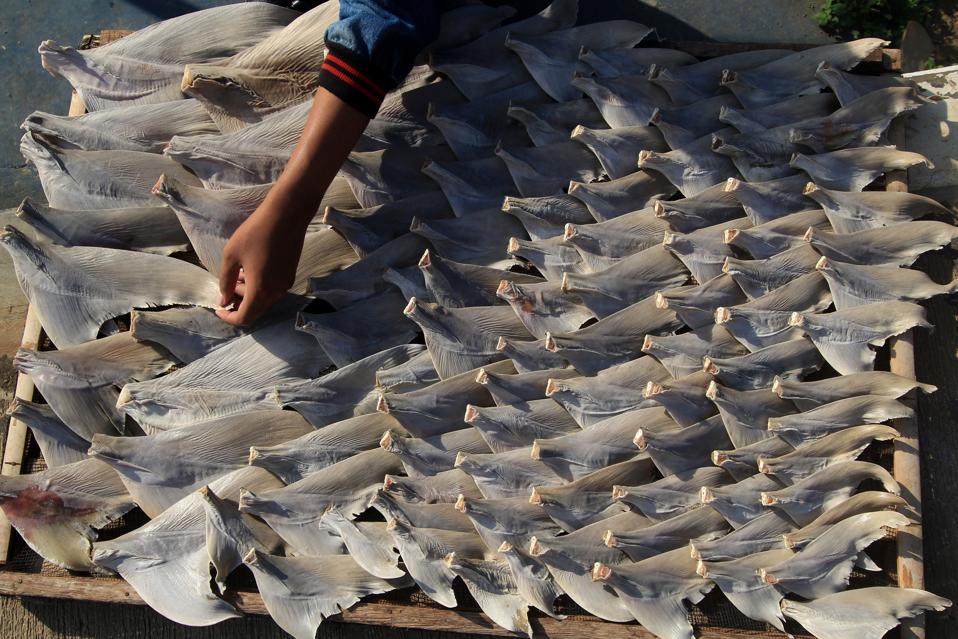 Even more telling is the imbalance in fatalities. For those five human deaths in 2017 (and an average of six a year), fisheries are exterminating sharks and rays at a rate of around 100 million a year. One hundred million.  Shark conservation is a serious and urgent issue as organisations like The Shark Trust seek to preserve them as a species and in doing so protect the wider marine environment, not to mention the economies of people whose livelihoods depend on sharks.

The truth is, you shouldn’t be afraid to go anywhere because of sharks. The majority of encounters are brief and harmless, and for many seeking them out, magical, but more importantly they’re also extremely, extremely unlikely.

This article was written by Duncan Madden from Forbes and was legally licensed through the NewsCred publisher network. Please direct all licensing questions to legal@newscred.com.

How American Public University System Is Preparing for the Coronavirus

What's The Difference Between Pandemic, Epidemic And Outbreak?