Ironically I was marveling at breathtaking new GOES-16 weather satellite data that has started to flow to National Weather Service forecasters when I heard about proposed deep cuts to the National Oceanic and Atmospheric Administration (NOAA) budget. The Washington Post broke this story yesterday, and it literally sent shockwaves through many scientific, stakeholder, and industry communities.  NOAA is the lead agency for the nation’s weather forecasts, weather satellites, fisheries, ocean services and climate monitoring. If you rely on TV weather forecasts, use a weather app, eat fish, enjoy boating or claim your status as an Earthling, these cuts potentially have implications for you. It is early in the process so it is beyond the scope of my intentions here to get into the politics. Congress will have its own view of NOAA’s budget, and the “sausage-making” of the federal budget cycle will begin. I have argued many times before as a former President of the American Meteorological Society that weather and climate information should be prioritized as a “national and homeland security asset.” I even laid out a pathway for collaboration between the weather community and the new administration in the Washington Post shortly after the election.  I noted in that piece that the weather and climate community stood ready to work with leaders as none these challenges are easy. However, any weakening of our technological, scientific, and human capabilities related to weather and climate places American lives and property at risk. Here are four ways NOAA benefits you right now (and there are far more).

Weather Satellites keep us from flying blind. I am willing to bet that you cannot fathom a situation in which the United States would be hit by a hurricane without warning today. This is exactly what happened  in 1900 when a major hurricane slammed into Galveston, Texas killing 6,000 to 12,000 people. It is still considered the worse natural disaster in U.S. history. Thankfully, a fleet of weather satellites provide continuous monitoring of weather. In fact, the United States moved the needle forward with the recent launch of the GOES-16 weather satellite. The National Weather Service Director, Dr. Louis Uccellini, tweeted on Friday,

He is right, and I described why in a previous Forbes piece. According to figures in the Washington Post, the White House proposal eliminates $513 million, or 22 percent of NOAA’s satellite division or National Environmental Satellite, Data and Information Service. This division also houses critical climate data at the National Center for Environmental Indicators. This data is vital for understanding how our weather and climate are changing. Numerous reports have cautioned about looming gaps in weather satellite coverage as our fleet of low-earth and geosynchronous orbiting satellites ages. Weather satellites provide a critical service for the public, the military, industry, and other stakeholders. They are like smoke detectors in our homes. You know they are there but really do not pay them any attention until your house is on fire. For the safety of our families, we replace the batteries when they age. This is pretty simple to do for a smoke detector, but large satellite programs are different. They require sustained and consistent funding for research and development, industry contracts, and support. The critical role of our weather satellite program is why the U.S. Government Accountability Office placed mitigation of potential weather satellite gaps on its “high risk issues” list. In recent months I got the sense that the country was finally getting a grip on this challenge with the launch of GOES 16, private sector engagement and other changes. Disruption of our weather satellite programs now is not wise. And oh by the way, some satellite data finds its way into the U.S. and European weather forecast models too. 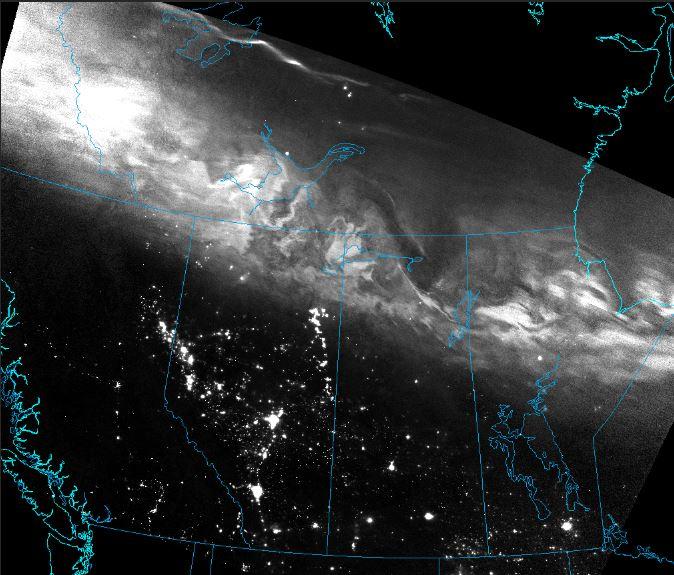 Aurora and the city lights from the Suomi NPP satellite Source: NOAA

Weather and climate advances don’t just appear out of thin air. There is a chance that you are reading this on a smartphone. This smartphone and other advances that we enjoy today like GPS, life-saving medical procedures, and precision agricultural methods did not just appear, “poof,” out of thin air. Such advances come from years of sustained research and development. Advances in weather forecasting are the same way. Though people often joke about weather forecasts being wrong, we are in an era in which forecasts are more accurate than ever. Mike Smith’s “The Invisible Successes of Meteorology” is an outstanding article in the Washington Post. When is the last time you recall an airplane crashing because of wind shear? Advances in weather radar technology have been critical in reducing this threat. Hurricane track forecasts today in the 3-5 day range are as good as 1-2 day forecasts several decades ago. Conditions that produced tornadic storms are often predicted well in advance and minimize loss of life. Our current capabilities have emerged because of research on satellite systems, dual-polarization radar (now deployed nationwide for improved severe weather and precipitation observations), and models (NOAA recently announced a significant generational upgrade of its main weather modeling system and has enabled many short-term models like the HRRR). The proposed White House budget would slash NOAA’s Office of Oceanic and Atmospheric Research by 26%. Since I am a meteorologist, I haven’t even spoken about the advances on the ocean side that are important to society. Research cuts compromise our ability to sustain and develop new capabilities in the future. Even 1-4 year lags or reductions can cause long-term damage because of erosion of technical skills, scientific expertise, and industry contracts. Much of the research and satellite programs within NOAA are supported by private companies so those industries and its employees are also impacted. A Tweet by UCLA’s Dr. Daniel Swain sums is perfect,

A reminder: virtually all we know about Earth’s atmosphere & oceans comes from sustained decades of government-funded scientific research 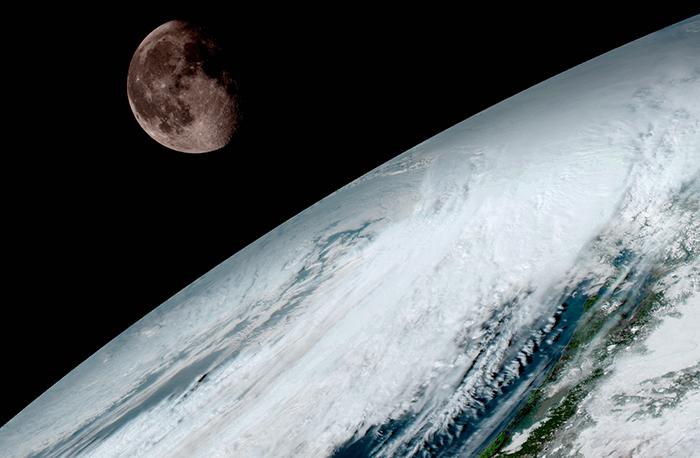 GOES-16 image of the moon and Earth. Source: NOAA

Coastal communities face unique challenges. The highly successful Sea Grant program is slated for elimination under the White House proposal. At least 33 states will be affected if this happens because Sea Grant has offices in them and supports coastal stakeholder engagement. Sea Grant’s website notes,

Sea Grant’s mission is to provide integrated research, communication, education, extension and legal programs to coastal communities that lead to the responsible use of the nation’s ocean, coastal and Great Lakes resources through informed personal, policy and management decisions.

This is exactly the type of effort that benefits taxpayers. Such programs connect the science to local communities and provide solutions ranging from how to deal with changes in production of a particular type of seafood to helping towns address “sunny day flooding” or saltwater intrusion into its drinking supply. This connectivity also shows communities that science is not some “villain with an agenda” but a resource for them.

Most of us eat fish. NOAA is also home to the National Marine Fisheries Service. They face a 5% budget cut. While modest compared to the aforementioned cuts, it bears watching. Their stated mission on their website is

stewardship of the nation’s ocean resources and their habitat. We provide vital services for the nation: productive and sustainable fisheries, safe sources of seafood, the recovery and conservation of protected resources, and healthy ecosystems—all backed by sound science and an ecosystem-based approach to management.

It is not clear how proposed cuts would impact the Service, but I included it so that you have a better picture of NOAA’s portfolio.

NOAA has generally enjoyed bipartisan support. I hope this continues as our leaders grapple with admittedly real fiscal challenges and the safety of our citizens.